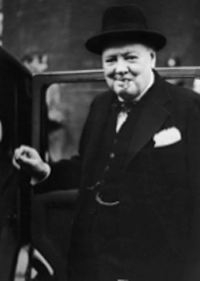 Winston Churchill was invited to address a graduating class at West Point Military Academy. Multi thousand dollars of tv and radio broadcasting equipment stood in place around the podium. Thousands of people waited to hear what the Prime Minister of England would share with the graduating class. At the appointed time the Prime Minister walked slowly to the speaker’s rostrum, put his cane over his arm, looked into the eyes of his audience and said, “Never, Never, Never quit.” turned around walked back to his chair and sat down.

In the same vein of thought Churchill told his country when Hitler threatened England with violent destruction that when they withstood the German onslaught and victory was England’s that they would reflect upon that experience and say, “This was our finest hour.”

Someone may be wanting to quit their marriage, their job, and may be even their life. That is exactly what satan would have you do and he would claim victory. I know you have what appears to be a sure defeat from this challenger from hell. However I remind you that there is a Champion from Heaven. Call on Him, trust Him and “Never, Never, Never quit.” and when the battle is over He will raise your hand in victory and you will say, “This was my finest hour.”

We have a new way to make a contribution! Please use our secure Paypal option.

Because of your generous gifts we are able to equip The Nursing Home Ministry with the resources including personnel, materials, support services, and equipment to fulfill our mission to share the hope of Christ with the forgotten residents living in Nursing Homes and Veteran Homes across the country.